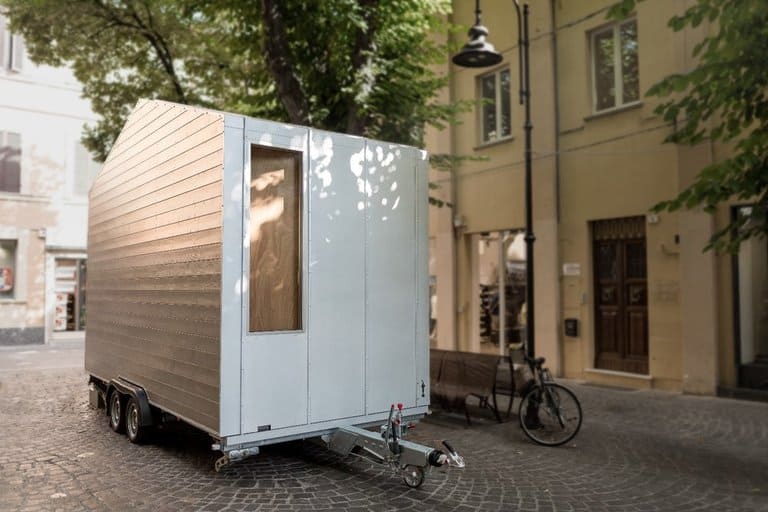 Leonardo Di Chiara’s 96-square-foot prototype, the aVOID, is a radically different design which isn’t all that easy to understand. So let’s see what the 27-year-old Italian architect/engineer has to say about it himself:

aVOID… draw[s] inspiration from the well-known American ‘tiny house’ typology. [It] is equipped with every comfort needed for everyday life and characterized by a strong adhesion to minimalist principles… aVOID is the result of an artistic-architectural research project.

So far, so good – we’ve seen an awful lot of American tiny houses, and plenty of them have been some combination of functional, minimalist and artistic. So what’s different? Di Chiara makes the reasonable point that what works for the wide-open spaces of the USA might not work so well for European cities:

[T]he typical American tiny house… has windows [on] all sides. This helps for sure to have a better feeling inside: the house seems bigger. But this means that you will always live as an independent unit, detached from the community… [W]e need a new typology, an urban tiny house typology. This is why my aVOID tiny house doesn’t have any windows on the longer sides: it is a row house. It doesn’t make any sense if there is no neighbor living next to you.

Fair enough; but then why not an actual row house, or an apartment? What’s the advantage of wheels? Di Chiara goes on to explain his concept of “migratory neighborhoods”:

[T]he houses like birds can migrate from a location to another always going to occupy the spaces which are not used by the city in that specific moment… change their location depending on the unused spaces inside the existing urban structure. Imagine a garden during the coldest winter time or a public school parking lot during the summer break.

Well, considering how hard it can be to legally park a THOW on your own property here in the US, we’ll start imagining that just as soon as we’re finished imagining a nice slice of pie in the sky. Di Chiara does note that he has to “talk to politician” before initiating his first migratory neighborhood, and hey, who knows, maybe the authorities in Europe are a little more open-minded about informal settlements. (Sure they are; just ask the Gypsies.)

Plausibility of that vision aside, there’s still one unaVOIDable question: Why does everything have to be concealable inside the left third of the house to leave a featureless and very narrow corridor on the other side? After all, leaving the kitchenette open and the bed down would make day-to-day activities easier – and you’d actually get a few more cubic feet of elbow room.

It turns out that the ultra-minimalist aspect of the aVOID stems from Di Chiara’s personal history; he grew up in a very small room of his parents’ apartment, and since he had allergies as a child, everything needed to be kept super-tidy. Now, he says, he finds inspiration in such spaces:

The void, which is obtained by closing again all the wall-mounted furniture, is the refuge of my creativity. The absence of any visual distraction caused by personal objects or daily business makes room for my imagination, which is reflected into my future designs.

For some reason, the bathroom window seems to be the only window you can’t close. 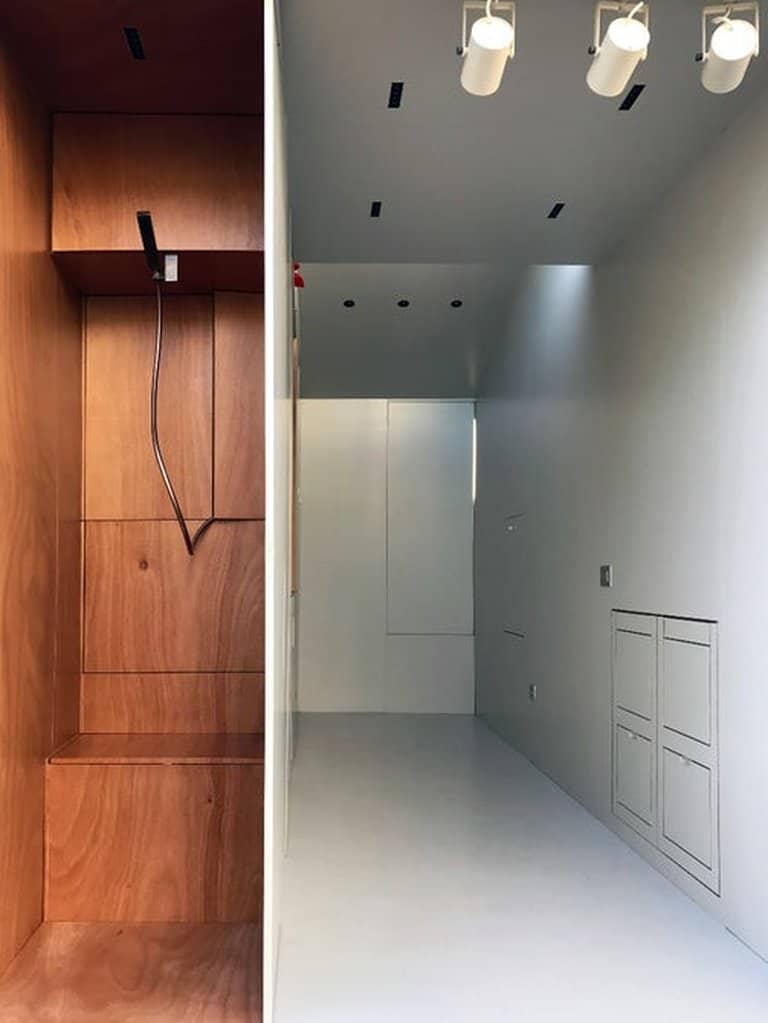 In the bathroom, the back wall conceals sink, and there’s a compositing toilet in the bench. The stark white walls of the other room conceal, well, quite a lot. 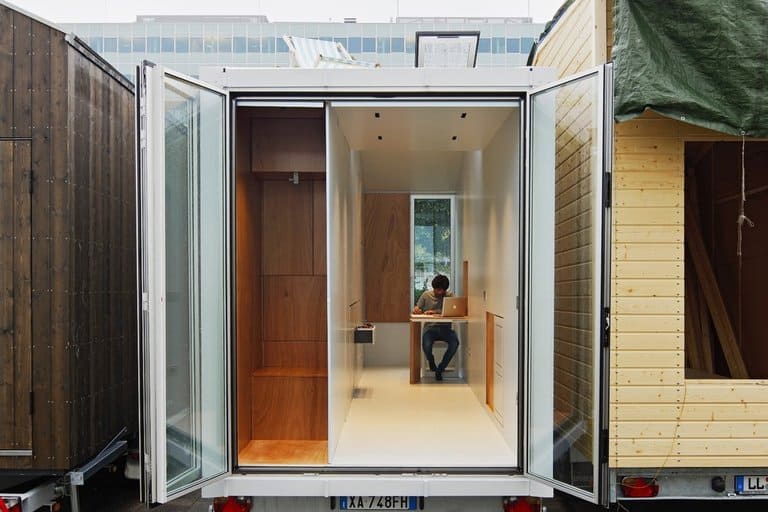 In its second most minimalist configuration, the aVOID makes a distraction-free workspace for Di Chiara. 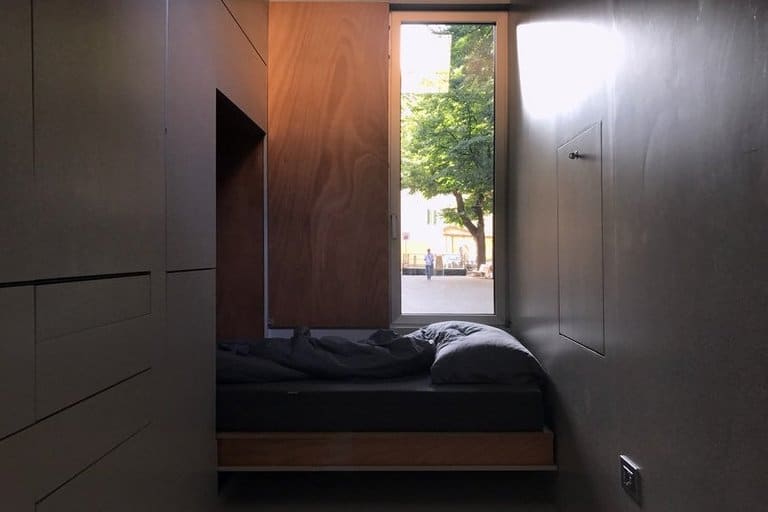 The single bed is convertible into a double. 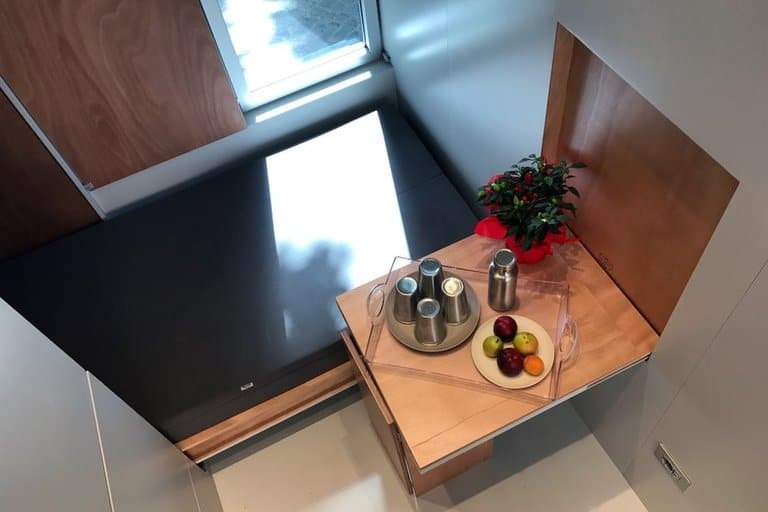 Breakfast in bed, or at least very near it. 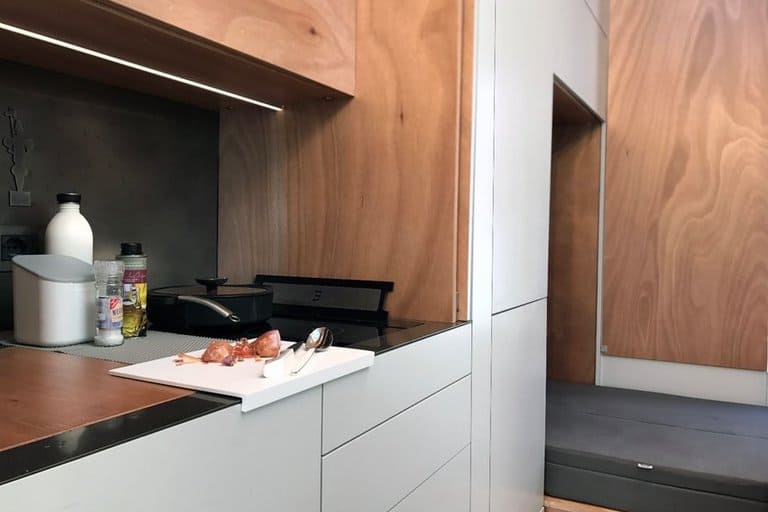 The kitchenette features a sink and a two-burner induction cooktop. 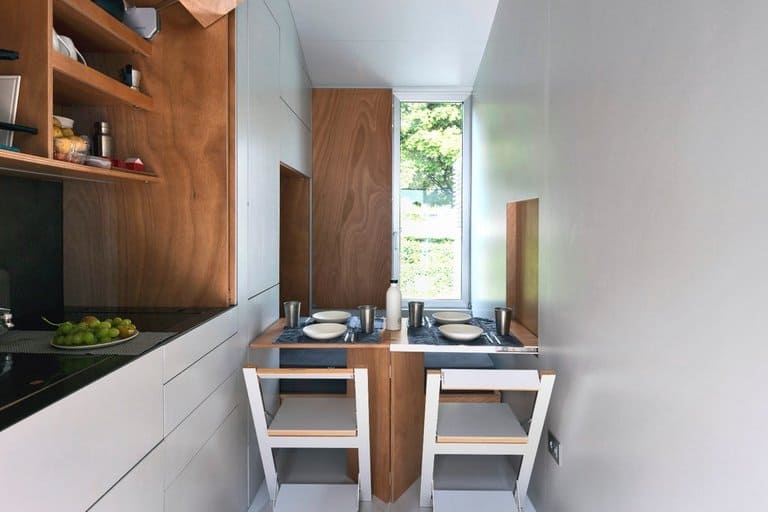 Dinner for four – but no way out until you clear the table. 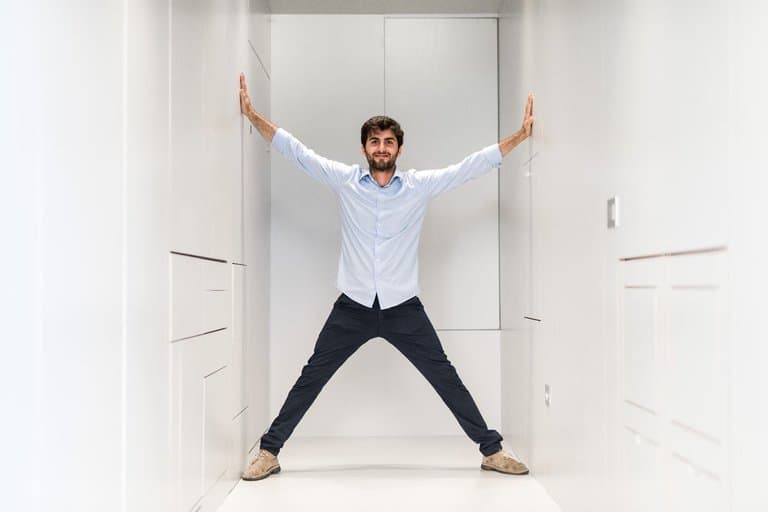 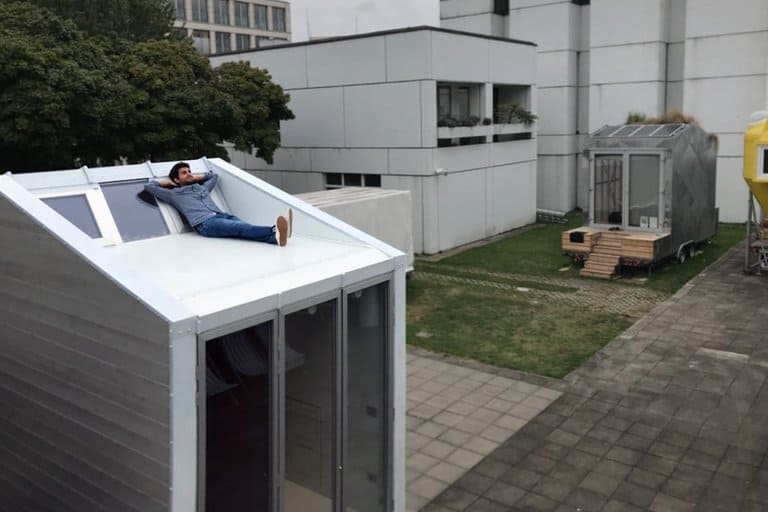 …but even he appreciates the great outdoors once in a while. Roof access is via a ladder which is (naturally) concealed inside.