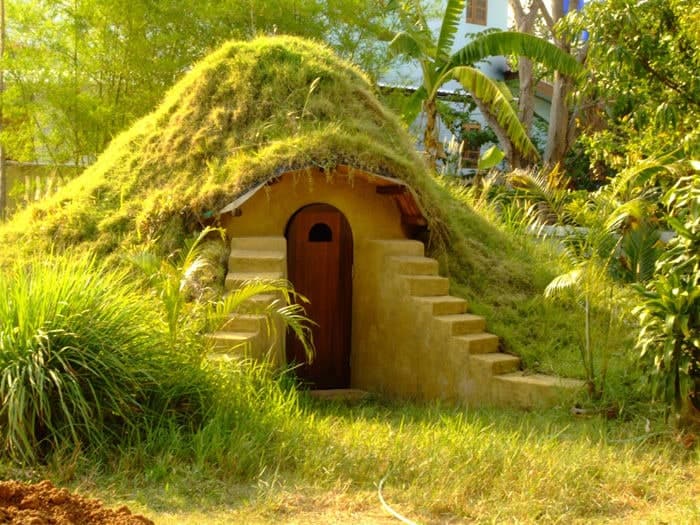 Yesterday we showed you some of the homes that Russian hermits built, and today I wanted to explore a similar type of dwelling that would be more suitable for a hobbit than a family of three. Known as an “earthbag” building, these spaces cost very little to build, around $300 in most cases, but do require a fair bit of work to create.

Sadly, this charming structure isn’t meant for living in. (It’s not in Middle-earth, either – it’s in Thailand.) At 50 square feet this one would be a bit small for a home even by tiny house standards, and creator Owen Geiger says that while it would be possible to build a 200-square-foot version, it probably wouldn’t meet building codes for an inhabited dwelling. If you wanted an interesting garden shed, chicken coop, or playful retreat for the kids, this might be a fun option. 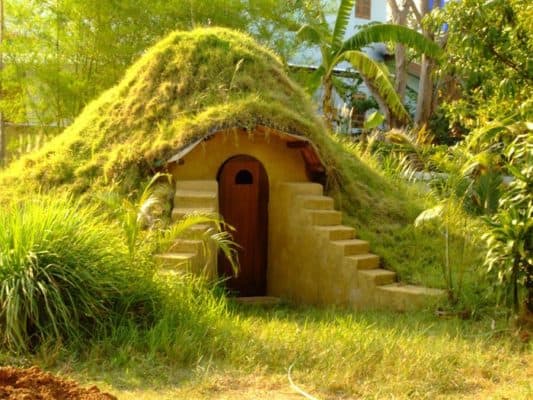 That’s not to say it’s unsafe. Fireproof and nearly as strong as stone, it’s guaranteed against floods, typhoons and earthquakes. You could use it as a bomb shelter, but if you’re not living in a war zone you’ll probably find it makes the most sense as a sturdier alternative to a conventional storage shed.

So what is it, exactly? Basically sandbags stuffed full of dirt and stacked into a corbel vault. As such it’s very cheap and simple to build. (Notice we said “simple”, not “easy” – Owen warns that there’s a lot of heavy lifting involved.) There’s a little more to it than sandbags, but not much, and if you’re interested Owen has articles that will tell you everything you need to know to build your own.

The first thing to do is prep the site, digging out a foundation of sorts. Here you can see how he fills buckets using a hoe, saving a bit of energy by scraping the dirt instead of shoveling it.

Here you can see the basic foundation laid out. 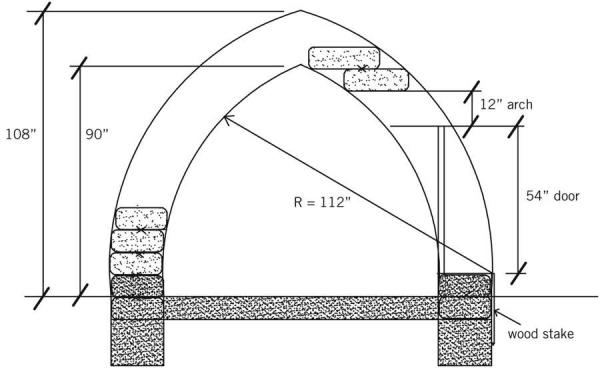 A string attached to a stake helps keep the circle’s radius nearly perfect.

When fully constructed, the earthbag dome is fairly durable, its thick walls able to impenetrable to fire and mortar rounds we suppose.

Posts lay between the bags and offer support for the door, or a window in some cases.