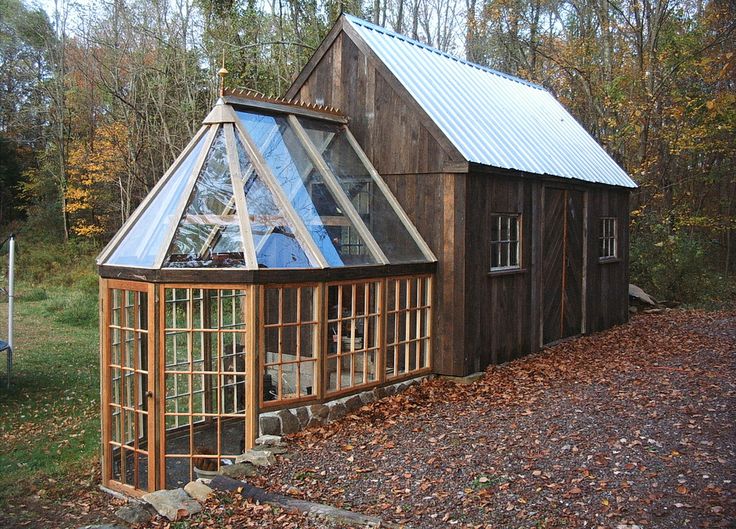 Connecticut woodworker Michael Fogg’s structure isn’t exactly a tiny house, as it’s not meant for living in, but it looks so good we just had to feature it here. It also takes a lot from the tiny house aesthetic – it’s certainly small enough, at 250 total square feet, and almost everything in it is recycled. Really it’s more like a shed, with a greenhouse where he germinates seedlings in the spring, dries hops that he uses for a home brew, and stores other pieces of equipment. 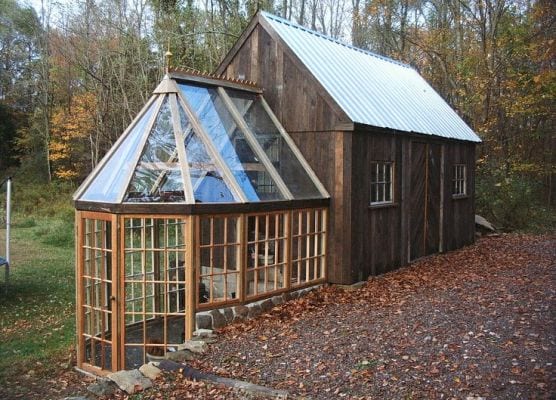 Most of the lumber came out of an old car dealership Michael was working on. There was over a thousand board-feet of old-growth wood, and Michael helped himself when he learned his client had no plans for it. Finding large beams, rafters, and solid 3/4 inch pine flooring was like striking gold for Michael and he initially wanted to use it for furniture, but then realized he had enough for something bigger. He decided to add the greenhouse after beating the garbage truck to a set of antique windows a neighbor was getting rid of.

Assembling the glass and lumber on top of a foundation he built from natural stone gave him a 70-square-foot greenhouse attached to a 180-square-foot barn. Beautiful, and very practical: Michael uses the complex for growing vegetables and brewing his own beer. You can learn more about his work on his personal website.