The amount of creative projects shared on the internet never ends, and we’re grateful for that because it means we get to see some very impressive DIY projects. This home-brewed box truck camper / motorhome is a perfect example. This project, dubbed the “Taj MaSmall“, comes courtesy of Kim, an inventive and obviously skilled woman who took ownership of a U-Haul GMC 3500 10′ box truck and built it from the ground up into a fairly luxurious home on wheels. From the outside it looks fairly inconspicuous, with little indication of anything out of the ordinary aside from the windows she added, but on the inside it’s quite a world of difference from the once barren moving truck.

Building the tiny home took two New England winters where Kim used the blank canvas of the former U-Haul truck and turned it into her tiny house RV conversion.

Kim has loved to build new things since a young child and after growing up playing with her father’s tools, she took the leap into converting trucks into tiny houses with her first project

The original Taj Ma Small was a 9’ x 5’ Big Tex motorcycle trailer that she converted into a campervan. This proved the inspiration for Taj Ma Small 2.0 as she experimented with the different ideas that would eventually go into her bigger, current project.
Taj Ma Small 1.0 was sold and the money made used to buy the current tiny home RV
conversion.

After buying the truck, in September 2012 Kim started the RV conversion by building the loftspace on the outside. Over several weekends she put the loft platform together and cut a hole in the roof so she could build the sleeping platform.
Thankfully the weather held out as she did it, though by November the temperatures were too low for the epoxy to set in the fiberglass. A local friend let her rent out a garage that was due for demolition and this enabled her to work late into the evening, even as it got extremely cold, on her project.

A pause in construction

Big hobby projects like converting a truck into a tiny house take a lot of time and
commitment. Thanks to life getting in the way, Kim paused work on the project for 11 months to focus on other things. Lucky for her, the garage that should have been demolished was still there in December 2012 so she could roll her RV conversion back into the garage to spend another winter in her dirty Carhartts and bring the project to a conclusion.

Here she worked on the finer detail of the project as we will see later – adding the shower space, composting toilet and other things that would make the tiny home a comfortable place to live.

As well as the fine detail Kim had to weatherproof the tiny house RV. Though she thought of the windows and French door, she overlooked caulking the attic space. She discovered this when she had to take the tiny house conversion out of the garage after the first phase of construction and the roof leaked! Thankfully she spotted the issue quickly and repaired the problem soon enough. Building a tiny home isn’t just about how pretty it will look in the end!

The detail that Kim did put in in the end made for a tiny home with all sorts of well thought out spaces and comforts that would together make a nice place to stay during a protracted road trip. Let’s have a look at some of those little details now: 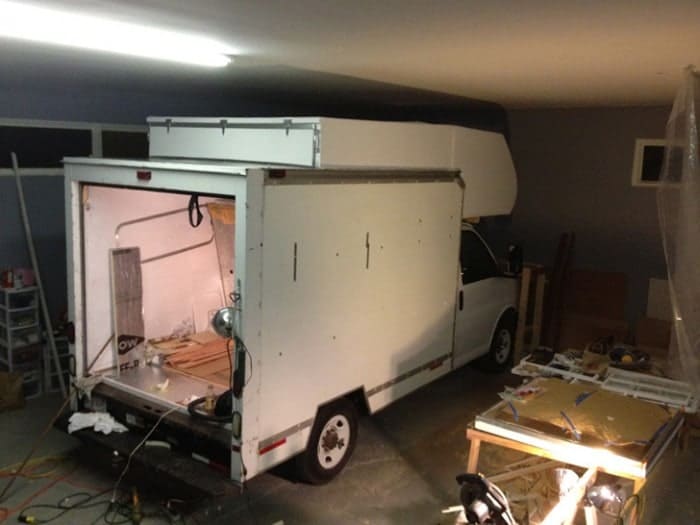 Kim used an abundance of reclaimed material like copper flashing inside the motorhome. 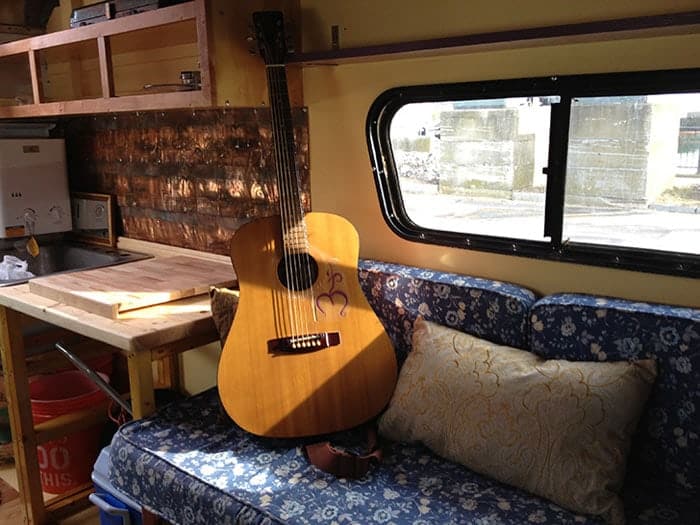 The inside was customized with all sorts of features to make her rolling home comfortable, including a couch, kitchen, sleeping loft, french doors in the rear, an instant hot water heater, and a most unique shower. 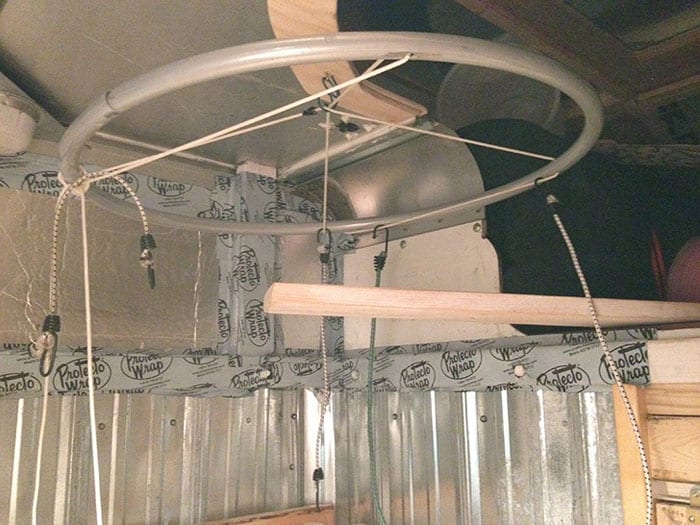 A cozy sleeping loft sits above the driver’s seat, while a multi-use beach-glass wall folds down to serve as extra counter space. When it’s folded up it serves as a wall to the shower area. 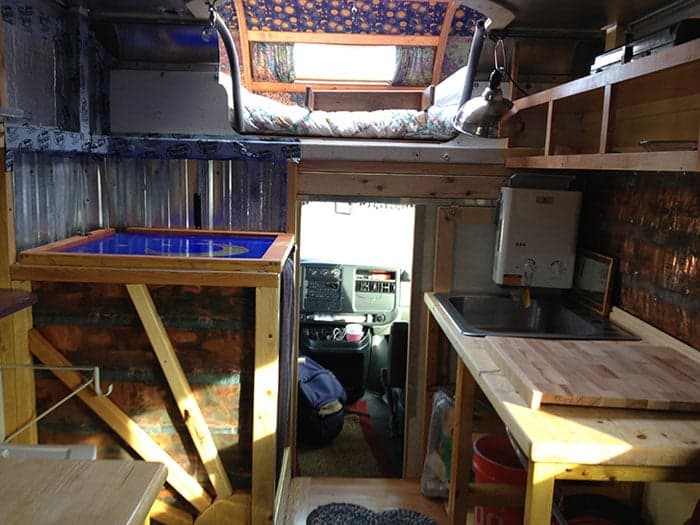 When she’s not cruising around on a new adventure, Kim can relax in this cozy living space accented by reclaimed french doors and thrift store cushions. 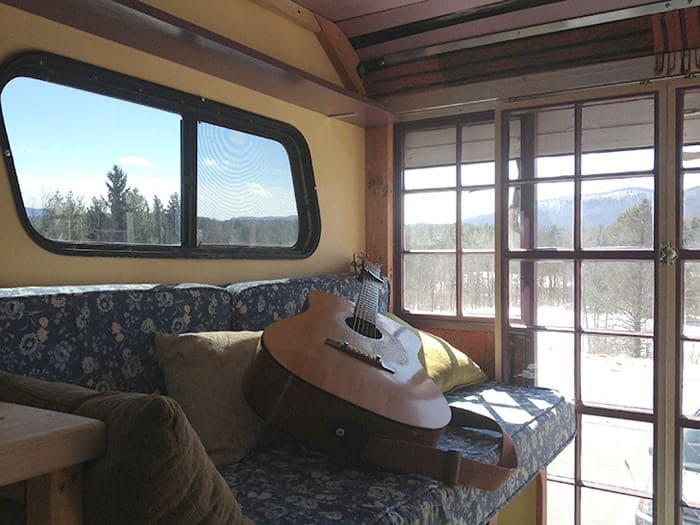 Photos courtesy of My Taj MaSmall

To see more of the Taj MaSmall, check out Kim’s blog at https://tajmasmall.wordpress.com