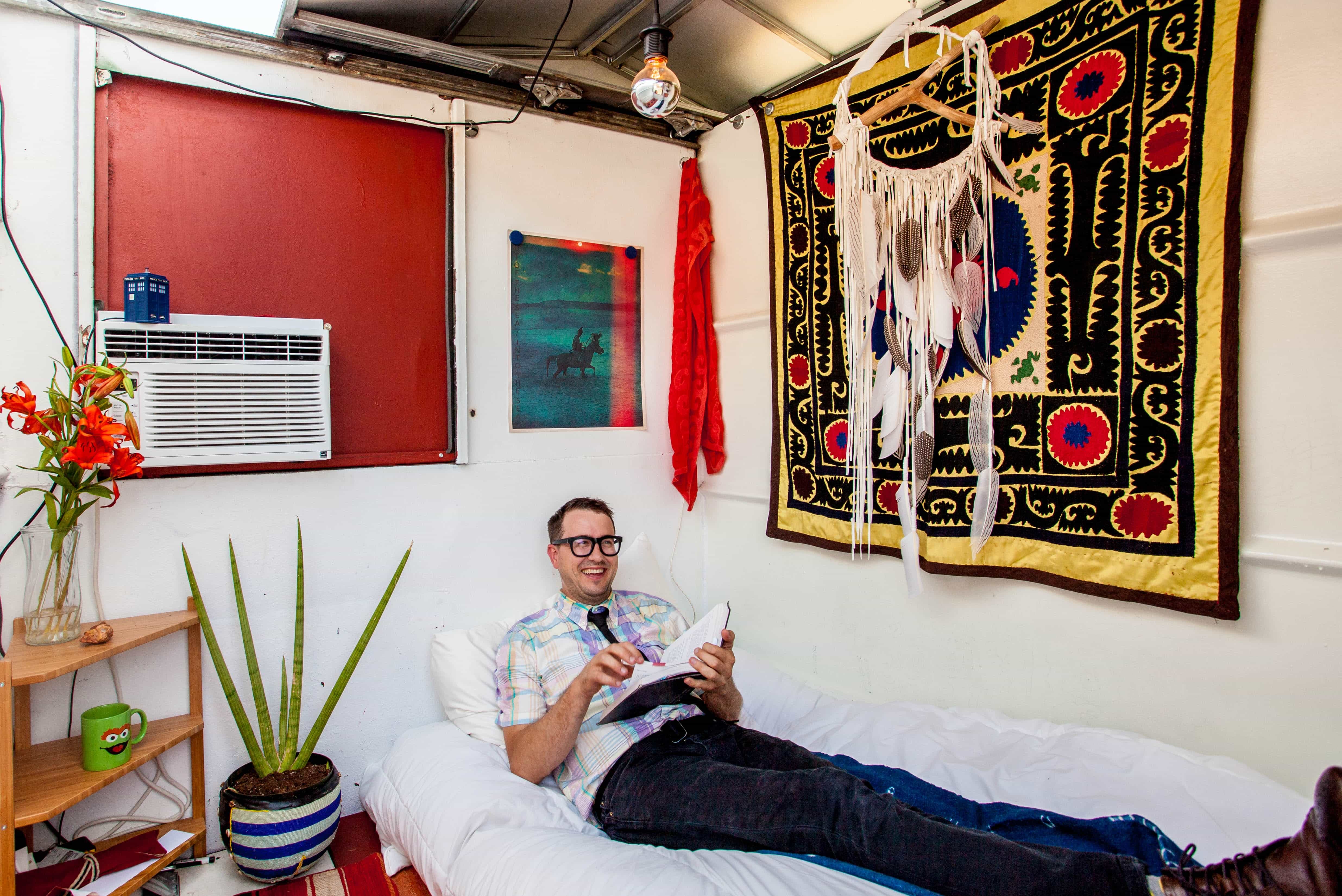 Living in a tiny house may not be for everyone, but there’s no denying it’s possible to cram most of the expected amenities into 300 square feet or less and enjoy a fairly normal lifestyle there if you have a mind to.

Now, could you do the same thing in a 36-square foot dumpster?

In a word, no. But Dr. Jeff Wilson, Dean of the University College at Huston-Tillotson University in Austin, Texas, is showing that it’s possible to live at least adequately in such a space.

He’s doing so as part of the DUMPSTER Project, a K-12 educational project focused on sustainability education as well as science, technology, engineering, and mathematics (STEM) and funded by the Ford Motor Company. For the project, whose name actually stands for “Developing Underutilized Methods for Promoting Sustainable, Transformative Education & Research”, Dr. Wilson and his students are turning a used dumpster into a (very) tiny house.

Dr. Wilson, now inevitably known as “Professor Dumpster”, has been living in it on the university campus since this spring. 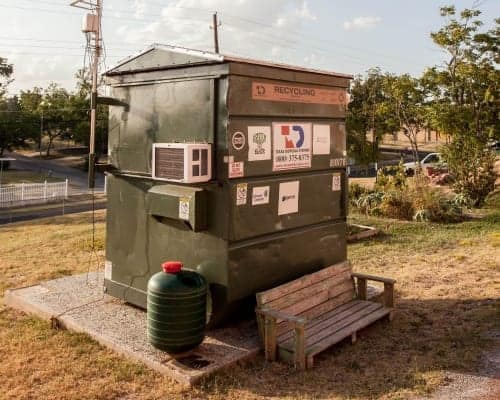 Dr. Wilson has a longstanding interest in the environment (his PhD is in Environmental Science) which dovetails nicely with the project’s goals of equipping “current and future generations with the tools they need for sustainable living practices” in a world whose population is expected to reach 10 billion by the end of the century. He sees it as an opportunity to educate young people about the effects of modern lifestyles on the environment, as well as a chance to design a well-thought-out, practical, and extremely tiny house.

The move to the dumpster also seems to fit with a downsizing trend in Dr. Wilson’s personal life. Formerly living in a standard-sized house, he had already reduced his living space by 80% when he relocated to a 500-square-foot bachelor pad following a divorce. After that, he got rid of most of his possessions by selling them on the Internet. When the time came to move into the dumpster, all he had left were four shirts, four pairs of pants, and a few hats and ties.

At that point, the dumpster didn’t have much either – not even a bed or a roof. Dr. Wilson used old cardboard boxes to provide some cushioning and insulation from the metal floor when he slept. When it rained, he put a tarp over the top. The Spartan conditions weren’t due to a lack of foresight or a rushed start to the project. Instead, Dr. Wilson deliberately set out to see how simply he could live and find out what the most pressing additions would be, then build those in one at a time before moving on to the next.

The most necessary feature turned out to be air conditioning. Summer in Austin is hot, and it’s a lot hotter in an uninsulated metallic box. After spring, Dr. Wilson couldn’t use the dumpster during the day, when the interior temperature approached 130º F. He could sleep in it if he went to bed late enough, as the temperature generally dropped below 90º by 11:00 PM. Thanks to a small air conditioner he bought in July, daytime temperatures don’t get much over 100º now. Still not ideal, and insulation is another priority item so that the dumpster stays warm enough this winter and will be more livable next summer.

The temperature data comes from a weather station on the roof that’s now been installed. The roof slides open to let some air in when the weather’s nice, but has to be closed (quickly!) in the event of rain. There’s also a mattress now, and some under-floor storage space, but the project is still far from complete. 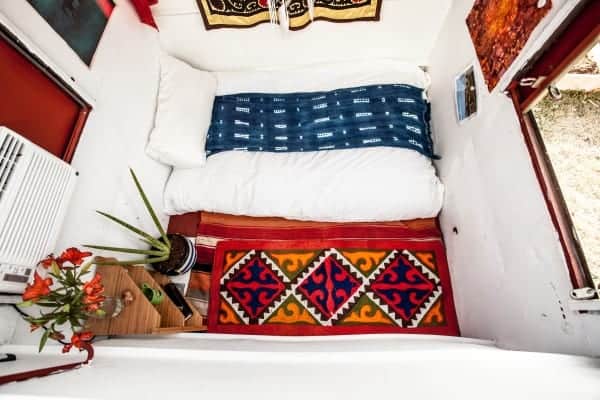 Further improvements planned for the current phase include interior lighting, weatherproofing, and locks for security. There will also be a rainwater-collecting cistern that will provide water to a sink in a small kitchen area. What Dr. Wilson is most looking forward to, though, are bathroom facilities. The toilet and shower won’t be in the dumpster itself, but in a room attached to it as a kind of outhouse. That’s still a lot closer than the gym Dr. Wilson has been using for this purpose, and he says he won’t miss the nighttime sprints to answer an unexpected call of nature.

As well as taking care of the odor issues that would be bound to occur with having a composting toilet inside a house no bigger than most bathrooms, the outbuilding will hold a refrigerator and a washer/dryer.

The third phase of the DUMPSTER project, set for the beginning of next year, will involve finishing work to make the tiny house look less like a dumpster. That includes installing windows and siding made with recycled wood. Solar panels will also be added to take the project off the electrical grid (it will still be connected to city water and sewer). One diagram we’ve seen shows a plan to add a second story, presumably made out of another dumpster, which will have a sleeping loft and a fold-out balcony. 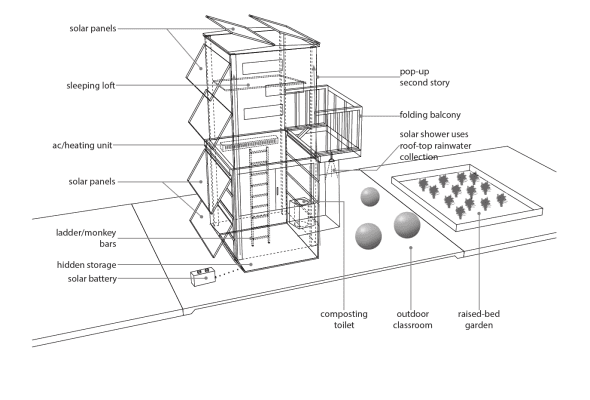 Aside from welcoming interested visitors to his dumpster, Dr. Wilson carries out the project’s educational mission by giving talks about it at Austin grade schools, with a focus on its potential for reducing waste and the use of energy, water, and space. The project has been incorporated into the city’s K-12 curriculum, and after the dumpster house has been completed (and Dr. Wilson has found somewhere else to live) it will be displayed at area schools.

In the meantime, despite the inconveniences – and sometimes because of them – Dr. Wilson is feeling at home. The lack of climate control and laundry facilities forced him to spend a lot more time out of the house, and he says that made his definition of “home” grow from 36 square feet to encompass the whole neighborhood. He met different people and interacted more with the community than he would have done staying in a house with a few more creature comforts, and seems satisfied that he’s proved the project’s hypothesis that it’s possible to live well on less.

Not for everyone, no. But at least for Professor Dumpster, life’s better than ever in a tiny house.