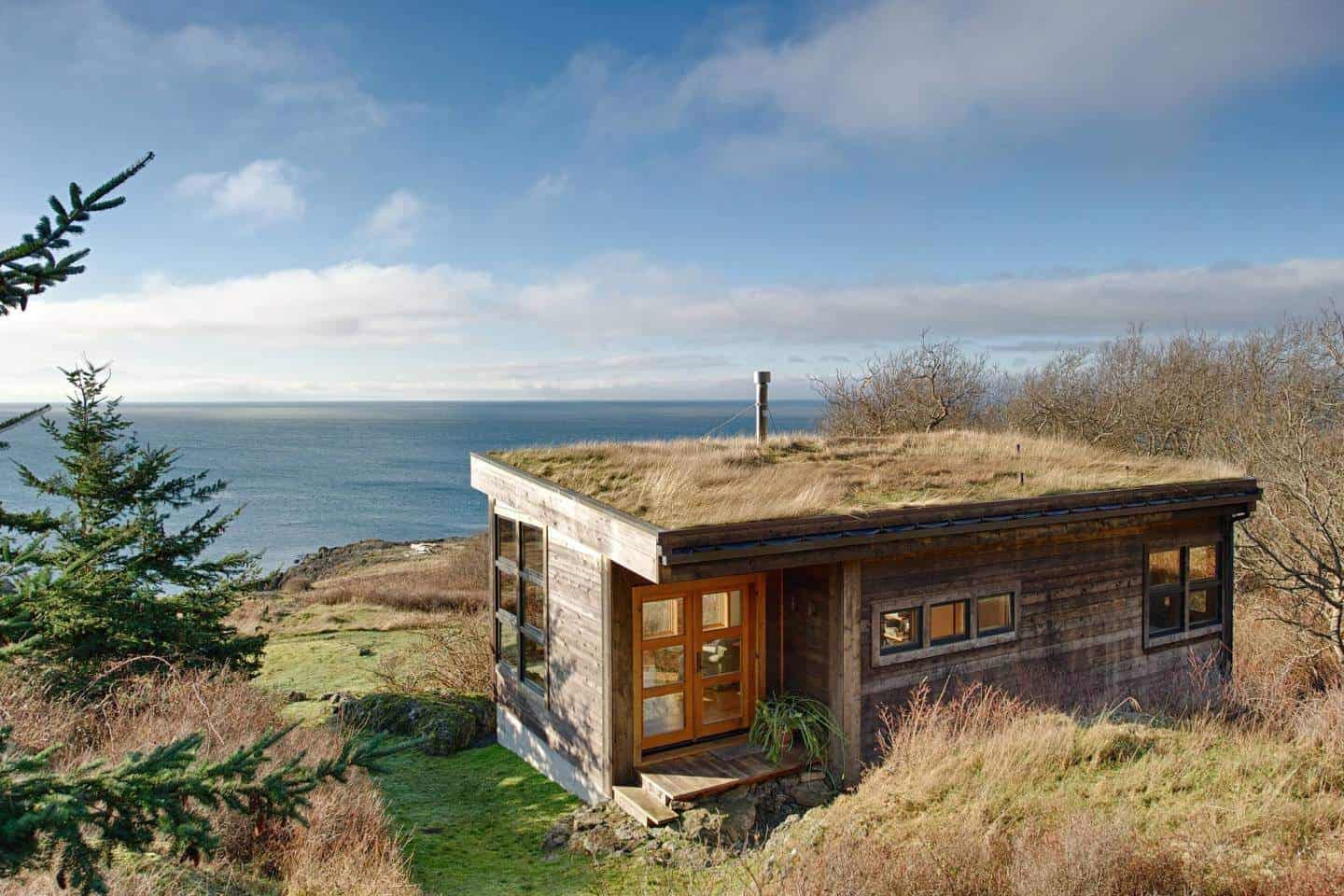 About the San Juan Islands

Way up at the Northwest corner of the United States, just off the coast of Washington there’s an archipelago known as the San Juan Islands. Accessible by ferry or boat, they were once home to an extensive logging community which has since devolved and today the islands are home to an abundance of vegetation and wildlife, including Alders, Douglas Firs, and Maple trees. It’s also home to some very cool tiny houses.

At high tide there are about 400 islands, of which 128 are named. The group of islands bring with them a long history of exploration and settlers. Originally discovered in 1901 by Spanish explorer Francisco de Eliza, who charted them and named them Isla y Archiepelago de San Juan, they came under rule from the British in the early 1800s until the Oregon Treaty parsed them into the United States control.

The island is home to a wide range of animals, from falcons and bald eagles to the most famous residents, pods of orcas that frequent the waters to feed on salmon and sometimes the harbor seals. Other marine mammels include river otters, sea lions, minke hales and dall’s porpoise.  On the island itself you’ll find black-tailed deer, although not many other mammels exist. At one point there were wolves, but they haven’t been around since the mid-1800s.

A fairly temperate weather pattern makes it hospitable, with temperatures generally ranging from 40 to 70 degrees depending on the season. The location is in an area that doesn’t get much rainfall or snow, and the majority of the islands are quite hilly with some flat areas and valleys in between.

This small cabin is located just across the Haro Straits from Canada’s Vancouver Island. From these photos, taken in April 2009, it looks to be pretty secluded and have some great views nearby, but we don’t have any other information about it.

At 688 sq. ft. this cabin is a bit larger than the typical tiny house, but as impressive as anything we’ve seen. Located along a winding path, nestled between a rock outcropping and a thicket of brush on the west coast of the island, the location was chosen for its remoteness and to block views of the nearby houses. 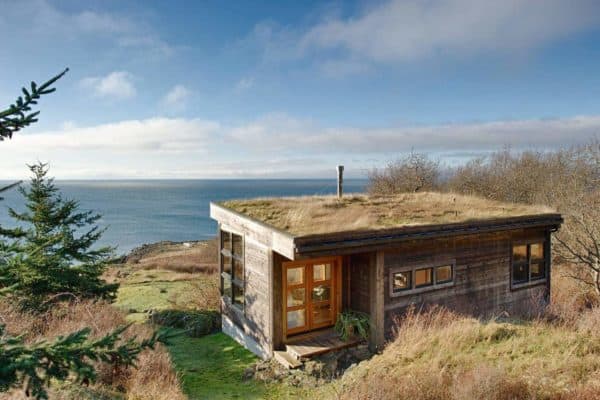 We love the blend of styles this house features, which include extensive windows and a sod roof that inconspicuously blends the house into the hillside. Inside it has high end appliances and custom cabinetry, adding to its charm. While all this might seem beautiful, keep in mind the price tag of this place – at $1.8m (yes, million) it’s quite a ways off the meter that most of would use to price a house. Although that price also includes five acres and 800+ feet of shoreline access, which no doubt accounts for a good portion of that price tag. 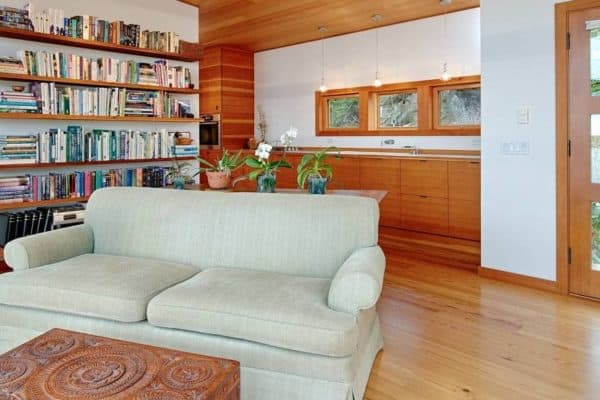 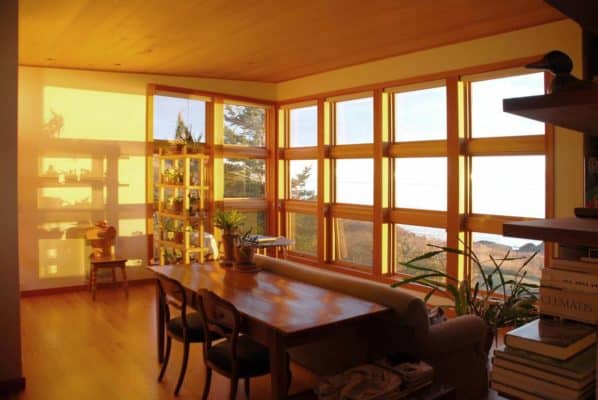 This cabin is perched high on a hill on the island, offering an astounding view of the islands and water below. At 672 sq. ft. again, it’s larger than some other houses we feature here but is nonetheless an amazing place. Built by architect David Vandervort, it consists of two 2-story towers joined by a single story living area. We love the layout, which offers great views from any spot. Inside each tower you’ll find a sleeping area accessible by ladder. The cabin is entirely off the grid so you won’t find any bathroom inside, and a wood stove provides heat in the cold months. 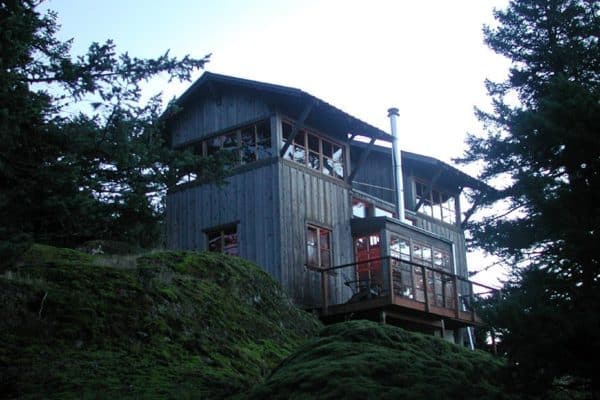 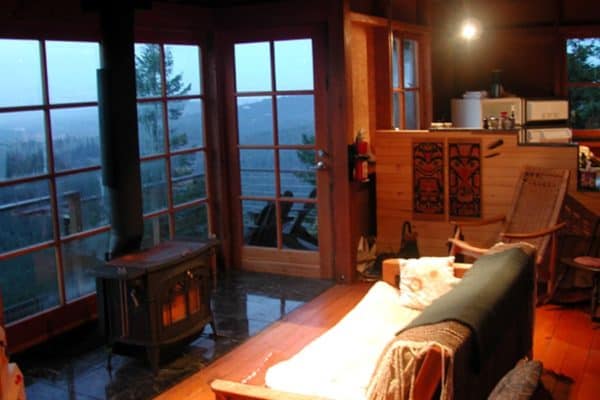 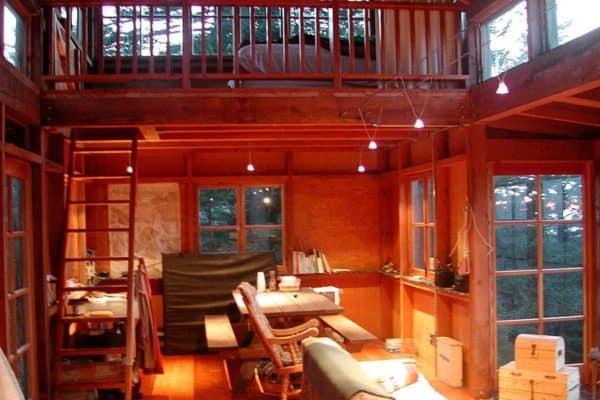 Here’s another spectacular cabin made by David Vandervort. It’s located on a sunny bluff on one of the San Juan Islands, and while the previous cabin we showed you was on the rustic side of things, this one is more refined. A flagstone patio outside merges seamlessly into the landscape and offers a place to enjoy the sounds of nature and the surrounding water below, while on the inside you’ll find a lot of finished woodwork and custom milled accents. It features a cross-shaped floorplan and a gabled roof, coming in at about 400 sq. ft. of interior space.

A kitchen, dining area and bathroom take up spaces in the respective corners of the first floor and a ladder offers access to the loft bedroom, where exposed beams that were milled from the island fir trees offer extra character. 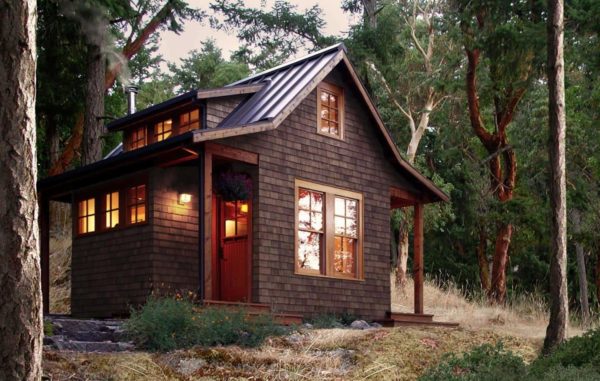 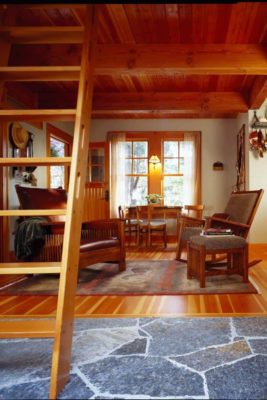 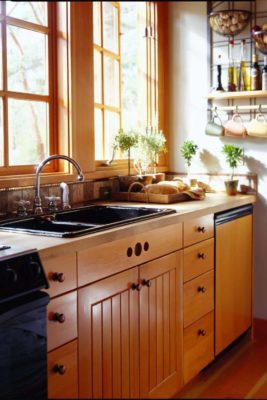 When you’re a writer, having a special retreat where you can find solace and inspiration is important. This beautiful house offers those things, along with a connection to nature that Thoreau would approve of. It shows off a modern design, courtesy of Olson Kundig Architects, and comes in at 500 sq. ft. with two parts inside. There’s a main living space, and a work space inside. 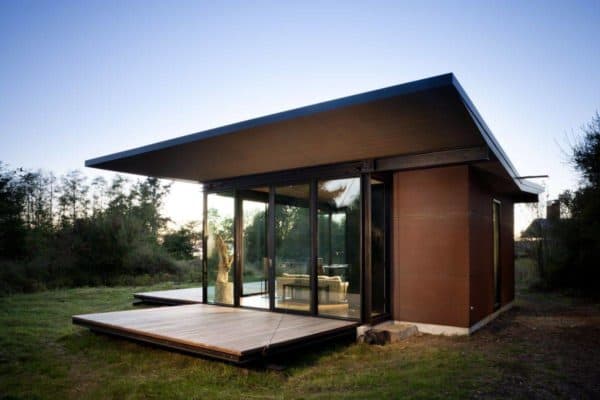 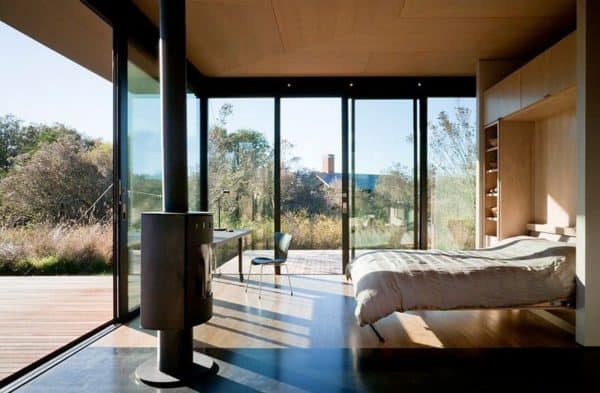 The roof overhangs three decks on the outside and has a sloped angle that directs rainwater away from the decks to keep them dry. The 10′ glass walls on three sides offer impressive views of the surrounding environment and allow light to flood the interior. A sparse kitchen area includes a fridge, a few feet of counter space and a bathroom with a shower.

One last feature worth pointing out is the folding decks, which detach from the ground and fold upward to cover the windows and protect the house from the elements when its unoccupied. 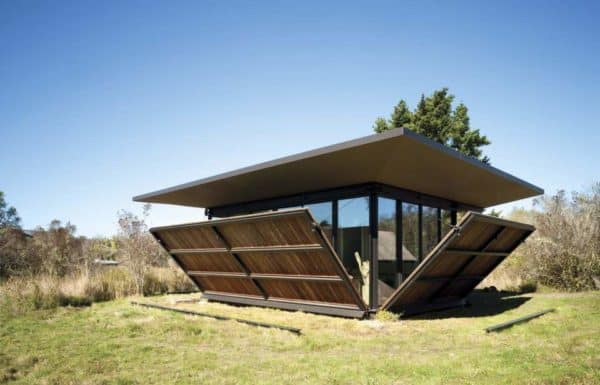